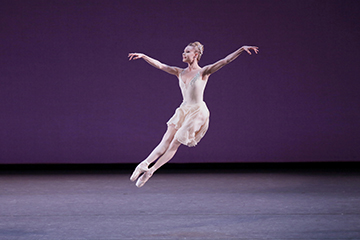 Highlights of the rest of the spring season included Mearns in Balanchine’s “Walpurgisnacht Ballet” (1980), which allowed her to engage the full panoply of her powers in a role that moves from cool classicism to wild fire. Also in this ballet, corps dancer Alexa Maxwell made a vivid impression as the soloist, showing she already understands how to control movement to make it speak eloquently.

Tiler Peck had some of her best moments in Balanchine’s seldom seen “Sonatine”(1975) and in Christopher Wheeldon’s “Mercurial Manoeuvers”(2000), both of which suited her musicality and warmth. In “La Valse” (1951), Sterling Hyltin danced the kind of fragile woman we associate her with. I wish I had seen her in “La Sylphide,” since she is the one NYCB ballerina who seems to possess the quality of fey vulnerability necessary for the role.  “La Valse,” created in 1951, bears the marks of the neoromanticism that Balanchine favored earlier in his career with works like “Cotillon” (1932) and “La Sonnambula” (originally “Night Shadow” 1946), the latter of which is one of Hyltin’s signature roles. But Hyltin was also impressive in Robbins’ “The Goldberg Variations,” looking fleet and elegant. This ambitious ballet, created in 1971, is notable for its length (at least an hour) and the fact that Robbins managed never to run out of inventive ideas in it. The movement for each of the individual variations ranges from the simplicity of patterned walks to highly virtuosic duets for the three central couples. To proceed from this formal work to “West Side Story Suite” (1995) was enough to cause whiplash, but it proved Robbins was versatile enough to handle both. It wasn’t a particularly good rendering of “West Side Story Suite,” although Georgina Pazcoguin gave her usual high voltage performance as Anita and Veyette was in excellent form as Riff. But the work looked under-rehearsed and the characterizations uncommitted and undefined. Justin Peck, replacing Ramasar, was miscast as Bernardo, a knife-wielding Latin gang leader being far too great a stretch for this quiet dancer.

Not that Peck lacks passion, but it is reserved for his choreography. His “Rōdē,ō: Four Dance Episodes,” which was the hit of the winter season, was given four additional performances in the spring, to equally rapturous reception. It is not set to the Copland ballet music, but to Copland’s composition on four themes from the ballet. Peck created his own response to the themes, with what might be read as slight references to the original ballet. 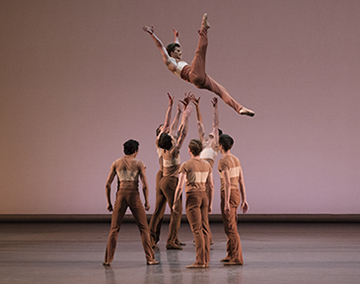 Set for sixteen men and one woman, it focuses on the men of the cast, perhaps the only male centered ballet in NYCB repertory. The 1942 Agnes de Mille work, for which Copland wrote the ballet score, is a narrative piece about a girl in a man’s world. Peck’s is a man’s world too, but one in which the costume references are to sports like soccer and running rather than western rodeos. There is a girl here, too, but she is the center of attention only in the duet. What is interesting is that this man’s world is not one of aggressive competition, but more generally of male camaraderie and trust. What competition exists is playful and good humored. Consequently when the girl appears, the men look at her as if in recognition, but they don’t compete for her and they don’t intrude on the lovers’ dance. This is not a masculine world that is usually emphasized, but it certainly exists. One thinks of the “band of brothers” soldiers speak of, or of close knit teams of players who depend on each other to win.

The ballet starts with the men lined up and crouched like runners at the beginning of a race, reinforcing the sports metaphor. In two of the episodes the movement is rambunctious and virtuosic, and in another, meditative and yearning. It is the slow section that is the most moving, with the men supporting the central dancer, Taylor Stanley, as if he dreams of a desired future, or a painful past. At various points, Peck makes excellent use of synchronized group movement to emphasize an exhilarating sense of power and drive, as the men move across the stage in bold jumps and turns. He chose his principal dancers carefully – Ramasar, Garcia, Daniel Ulbricht, Veyette, and Mearns – but he also gave great dancing opportunities to every man in the cast, and they deliver with total commitment. Although Peck has shown remarkable promise in his earlier ballets, “Rōdē,ō” is in my view a breakthrough, where he has finally freed himself from the influential choreographers whose work dominates NYCB’s repertory, and found his own voice. 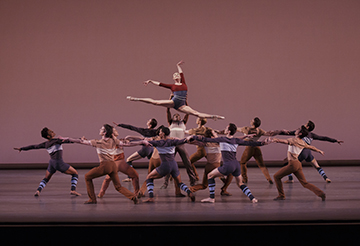 The other works that were most notable during the season were all short and came together in one program, separated by pauses between each: Liam Scarlett’s “Funerailles,” Troy Schumacher’s “Clearing Dawn,” Jean Pierre Frohlich’s “Varied Trio (in Four)” and Christopher Wheeldon’s duet from “This Bitter Earth.” The Scarlett, Schumacher and Frohlich pieces were premiered at last year’s NYCB gala, while Wheeldon’s ballet was choreographed in 2012. All but “Clearing Dawn” were duets. Scarlett, who is the major choreographer for the Royal Ballet, showed his roots in a dance that looked like “Mayerling” revisited. It was one of those male/female struggles, much beloved by Kenneth Macmillan, where the man tosses the woman around and she comes back for more. The most interesting aspect of it were the costumes, designed by Sarah Burton for Alexander McQueen, and which consisted of an extravagant black and white ball gown for her and an 18th century style jacket for him, worn loose over a bare chest. It was danced by Gretchen Smith and Zachary Catazaro with the cold-blooded zeal it called for.

Far more inventive was “Clearing Down,” set for six dancers, which started with disappearing coats, and went on to a kind of group play that stressed both fighting gestures and show off ones. Although it included dancers from all three ranks – principals, soloists and corps – everyone danced equally as part of a group. There was an informality and sense of fun about the work, even in the child-like conflicts, which no one seemed to take very seriously. But the most notable aspect of the dance was its lack of classical vocabulary. Schumacher, who is a soloist with the company, pushed beyond the usual steps and gestures of the danse d’école to find expanded forms of expression, and he succeeded very well.  I look forward to seeing what he will do next.

Jean-Pierre Frohlich, a former member of NYCB and now a ballet master, set his beautiful “Varied Trio (in Four)” to music of Lou Harrison. The composer’s gamelan influenced score must have also influenced the choreography, which included many sinuous arm gestures coupled with occasional sharp, percussive ones. It was danced by Hyltin and Ramasar in sky blue leotards against a darker cerulean cyclorama. As in Schumacher’s piece, Frohlich seemed to be searching beyond the classical ballet vocabulary for inventive movement forms, and like Schumacher, he also succeeded, although in quite a different way. Here the dancers were like fluttering ribbons of motion, entwining and parting, then coming together in ever changing shapes and images.

“This Bitter Earth,” the final of the four works, added another dimension to this varied quartet. Using film music by Max Richter and Dinah Washington, the dance stressed sliding and swooping movement that played off of both the melancholy music and the poignant lyrics of Washington’s song of sadness and hope. The duet featured Tiler Peck, at her finest, partnered by an equally fine Tyler Angle. Peck always seems to me a quintessentially contemporary dancer, and Wheeldon’s works are admirable vehicles for her.

As mentioned at the beginning of this review, NYCB has always been a company that stressed a varied repertory, although Balanchine’s ballets were at its core. Peter Martins must be applauded not only for carrying on that tradition, but expanding it in extremely productive ways. A recent New York Times article noted that for those wanting to hear new music, they would be better off attending NYCB than the New York Philharmonic. Martins has also not only engaged the finest contemporary choreographers, he has founded an institute that helps nurture new choreographic talent. These elements put NYCB in a league of its own, and New York audiences are the beneficiaries.

This is only a preview. Your comment has not yet been posted.

The letters and numbers you entered did not match the image. Please try again.

As a final step before posting your comment, enter the letters and numbers you see in the image below. This prevents automated programs from posting comments.

Having trouble reading this image? View an alternate.

(Name and email address are required. Email address will not be displayed with the comment.)