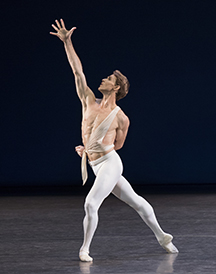 New York City Ballet is noted for the diversity and size of its repertory, however the company outdid itself in its spring season, offering not just a bouquet, but an entire garden of ballets. The proceedings began in May with three programs of Balanchine’s stripped down, modernist “black and white” ballets, and ended six weeks later with the choreographer’s opulent, full-length narrative work, “A Midsummer Night’s Dream.” In between there was a program that managed to successfully combine Jerome Robbins’ baroque-inspired “The Goldberg Variations” with his clamorous paen to street gangs, “West Side Story Suite,” and further repertory that included recent works by young choreographers and a new work (at least for the company) from a 19th century Danish choreographer, August Bournonville.

It was Bournonville’s “La Sylphide,” that received the most pre-season attention. Not that Bournonville is unknown to NYCB. The important Danish teacher, Stanley Williams, was a presence in the men’s classes at the School of American Ballet for many years. In the 1970s Balanchine asked him to create a ballet based on Bournonville excerpts for the company. “Bournonville Divertissements” was premiered in 1977 and has been in the repertory from time to time since then. It was performed this season as a prelude to “La Sylphide.” In addition, Peter Martins, who has directed the company since Balanchine’s death, was a principal at the Royal Danish Ballet before joining NYCB. He originally staged this production of “La Sylphide” for Pennsylvania Ballet in 1985, only now bringing it to his own company. Despite this extensive interaction between New York and Denmark, the dancers who appeared in the two casts I saw of “La Sylphide” and “Bournonville Divertissements” seemed to have little idea of Bournonville style. Why Martins didn’t insist on more accuracy is a mystery. What was missing most was the lightness of the jumps and the beautifully articulated shoulders, arms and torsos that are so much a part of Bournonville style. Here is how the great Danish dancer, Erik Bruhn, described that style in his book on Bournonville technique: “His variations are full of fascinating and unexpected changes of épaulement and direction, and they usually cover the whole stage. The dancers seem to dart and skim over its surface, and sometimes they really soar.” He complained that many English and American choreographers stressed line over ballon and elevation. It is interesting to consider this observation in relation to Balanchine. Perhaps his greater interest in women’s dancing over men’s would account for an emphasis on line. As for the question of épaulement, one could argue that Balanchine favored geometry over the sinuous line, and it was partially because of it that his choreography appears modernist.

In the performances of “Bournonville Divertissements,” most of the dancers looked as if they were struggling with the combination of demanding beats coupled with the constant changes of direction. There was also the challenge of doing pirouettes from a second position preparation instead of the more customary fourth. But it was the lack of épaulement that was most absent. It made the dances look flat and far less nuanced than they should have been. Even the formidable Theresa Reichlen, who usually conquers all, looked slightly uncomfortable and her movement blurred, especially in the small, very fast transition steps that are also a hallmark of Bournonville style. She danced the “Flower Festival in Genzano” duet with Tyler Angle. The strongest dancing in “Bournonville Divertissements” came from Joseph Gordon in a solo that he performed in both of the casts I saw. Tall and blond, he has presence and showed the necessary clarity in his jumps and beats. Although still a member of the corps, he was notable in several solo roles throughout the season, particularly “The Goldberg Variations.”

Of the two principal casts I saw in “La Sylphide,” Lauren Lovette and Anthony Huxley made a stronger impression than Tiler Peck and Gonzalo Garcia. Yet although Lovette was lighter in her presentation than Peck, neither of the women appeared to understand that the Sylph is not human, but a supernatural creature who only superficially resembles a human. Both Lovette and Peck made her appear too flesh-and-blood, her actions too emphatic and realistic. The Sylph is also, of course, a symbol of James’ yearning for something beyond the safe bourgeois world of home. He pays a terrible price for what was viewed, at least by 19th century keepers of the status quo, as a delusion. Of the two casts, the only dancer who truly succeeded was Huxley, whose refined technique and natural ballon served him well. He had the precision and speed for his solos, and he also proved to be a surprisingly effective actor. He is most often cast in roles that call for pure dancing, but here he was understated yet deeply immersed in the role, making James a far more sympathetic character than usual.

“La Sylphide” was not helped by Susan Tammany’s sets and costumes, particularly the second act forest scene, which she depicted as something resembling a Fauvist painting, in intense unnatural colors that clashed with the sense of romantic mystery that the scene should evoke. Her Highland costumes, too, could have used a bit of toning down. In some instances they approached the garish, especially in the brilliant violet of James’ kilt.

Fortunately, the Bournonville ballets were an exception in a season that otherwise held many fascinations. It was, for example, instructive to see three programs of Balanchine’s black and white, or leotard, ballets on consecutive programs. These were the works that Balanchine chose to present in variations of practice dress, ostensibly to show the body clearly, but more practically to save the company money, at least at the beginning, in its more impoverished years.

Balanchine’s first major ballet, “Apollo,” was the earliest of these works offered, although when it was premiered in 1928 it not only had a set and costumes, it had a narrative (Apollo’s birth and growth to adulthood). Balanchine eliminated these details over time, until today there is not even the staircase that used to lead toward Mt. Olympus. Adrian Danchig-Waring was an Apollo I had never seen before, and although he does not have the physical beauty or magnetic stage presence of Chase Finlay and Robert Fairchild, two company principals who often dance the role, he brought a freshness to the part that was charming, especially in the early sections of the ballet. Danchig-Waring is an intelligent artist who, like several other company members, has grown substantially over the last few years, and he is likely to deepen his interpretation as he continues to perform the role. Tiler Peck as Terpsichore, his primary muse, danced with her usual musicality, but her natural warmth had to be tamped down here, which made her less suited to Terpsichore than cooler dancers.

This is only a preview. Your comment has not yet been posted.

The letters and numbers you entered did not match the image. Please try again.

As a final step before posting your comment, enter the letters and numbers you see in the image below. This prevents automated programs from posting comments.

Having trouble reading this image? View an alternate.

(Name and email address are required. Email address will not be displayed with the comment.)